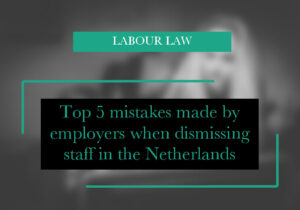 Dismissal has far-reaching consequences in The Netherlands and the judge and the Dutch UWV monitor dismissals strictly. So be well prepared before you decide to dismiss an employee. Unjustified dismissal can have serious financial consequences. Notice that employers might being faced with a large compensation claim after dismissal or having to take the employee back. What are the most common mistakes employers make when it comes to dismissal in The Netherlands?
Our employment lawyer in Amsterdam, Paul Snijders, has more than 30 years experience as a lawyer for employers.

1. Dismissal without UWV approval or the consent of the employee

You probably recognize it, every contract has a termination clause. It reads as follows: The employment contract may be terminated prematurely at any time by either the employer or the employee, subject to the agreed notice period’. Clear, right? So as an employer you can always terminate as long as you observe the notice period. Wrong. A termination clause is only useful if you can terminate due to an economic or organizational need. As an employer, you must first go to the UWV to request permission to terminate the employment contract. Only once you have received the dismissal permit may you terminate the employee, subject to a notice period. If you terminate without permission from the UWV, or without the consent of the employee, you can expect a letter from a lawyer and a difficult procedure at the cantonal judge.

It often happens that an employer is fed up with an employee. So then you summarily dismiss that person when your patience has run out. Done. Really? You may only dismiss an employee for an urgent reason. You can only do that in a very serious situation. An urgent reason means serious culpable behavior or omission that makes any cooperation permanently impossible. However, one serious situation is not the other. Our lawyer can clarify that. It really has to be objectively so serious that the employment contract cannot be maintained as a result. A failure to show up at the company doctor’s is usually not enough for this. Theft or fraud, serious threats, violence or work refusal: a judge can also take a different view. Therefore, first contact a specialized lawyer in labor law, because he knows how judges look at an urgent reason in practice.

3. Waiting too long with instant dismissal

So if there is only one urgent reason, you are there as an employer, and you can dismiss immediately? That too is questionable. A summary dismissal is only valid if it is given without delay. What is immediate? In practice, it means that the judge will assess whether the dismissal was given without delay or postponement. So as soon as possible after the employer became aware of the urgent reason. Even if it is the weekend, the director is on vacation or the employee does not answer the phone, give the dismissal as soon as possible and make sure you have written proof of the given dismissal, also by what’s app, voicemail or e-mail: days too long waiting with dismissal can cost you as an employer dearly.

4. Forget to include the reasons for dismissal in the letter of dismissal

If you summarily dismiss an employee with a good urgent reason, then you are not done yet. Sometimes it happens that a particular reason for dismissal is not properly established after a few days. For example: you dismiss an employee for theft from the cash register, but the camera images show a few days later that the employee was only changing money. No problem if you then add something else to the accusations? Such as poor performance, being late a few times, or other demonstrable reproaches from the file? Wrong.
Once a reason for dismissal has been given, it is ‘fixed’. This means that, as an employer, you cannot subsequently cite all sorts of other reasons to reinforce the dismissal. If, for example, the reason ‘theft’ mentioned in the letter of dismissal is omitted, then, as an employer, you cannot rectify this afterwards with other reasons for dismissal not mentioned in the letter.

5. Dismissal in an invalid probationary period

There may be many more reasons to have a dismissal overturned in court. As a specialized employment law attorney, we would be happy to tell you more about this. Call our lawyer in Amsterdam Paul Snijders before you decide to dismiss an employee. We can assist and guide you through the dismissal process at short notice. 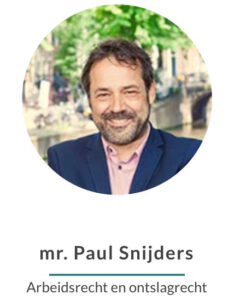